1. photovoltaic cell panel
The solar panel is the component that supplies energy for the solar street lamp. Its function is to transform the light energy of the sun into electric energy, which is transmitted to the battery for storage. It is the most valuable component in the solar street lamp. Monocrystalline silicon is the primary material for solar cells. It is the solar photon and the radiant heat that push and affect the P-N junction holes and electrons in solar cells. It is also known as the principle of photovoltaic effect. Now the power of photoelectric conversion is about 13% - 15% of monocrystalline silicon and 11% - 13% of polycrystalline silicon. Now the latest skills include thin-film photovoltaic cells.

As a small photovoltaic system, the loss current of the controller of the solar street lamp system should be less than 1% of the rated working current. Low power components are selected in the design of the system controller circuit. The voltage comparator composed of the integrated operational amplifier is used as the control circuit. This circuit is simple, reliable, easy to maintain, low cost and very low power consumption of the circuit itself A circuit with good matching. The key of this circuit is to design a better voltage return difference according to the charge and discharge characteristics of the battery. At the same time, the selection of components should be reliable. In addition, the charge and discharge state indicating circuit composed of LED becomes a controller circuit with practical functions, which has the functions of preventing over discharge and over charge of the battery.

Based on the photovoltaic controller and the charging controller, the control system add super capacitors, which is connected between the DC bus and the ground wire to stabilize the voltage of the DC bus, buffer the excessive energy provided by the photocell, and then discharge it to the battery and then provide it to the load.

In the design of photovoltaic controller, the boost circuit is usually used to generate higher voltage than the two ends of the photovoltaic panel, which is conducive to charging the battery. At the same time, it overcomes the drawback that the anti reverse charging diode in the traditional circuit clamps the battery voltage at 12V. However, when the light is insufficient, if the battery is to be able to continue charging, the control circuit will cause the working point of the photovoltaic cell to separate from the maximum power output point, which will reduce the power generation efficiency of the photovoltaic street lamp system. Therefore, when designing the control system, it is necessary to preset the threshold value of the weak light to ensure the normal charging of the battery through the super capacitor buffer under the weak light.

If photovoltaic cells charge battery directly, the output voltage will be unstable when the light is weak and other interference factors exist, which makes it difficult to maintain the minimum charging voltage when the photovoltaic cells are charged, and finally the system can not charge the battery normally within the light range. By using super capacitors, the system accumulates the unstable output energy of the solar cell in cloudy days. When certain voltage conditions are met, the energy in the super capacitors is released to the battery through the boost circuit. The boost circuit diagram is shown in Figure 2. This method can improve the efficiency of power generation when the sunlight is not strong. 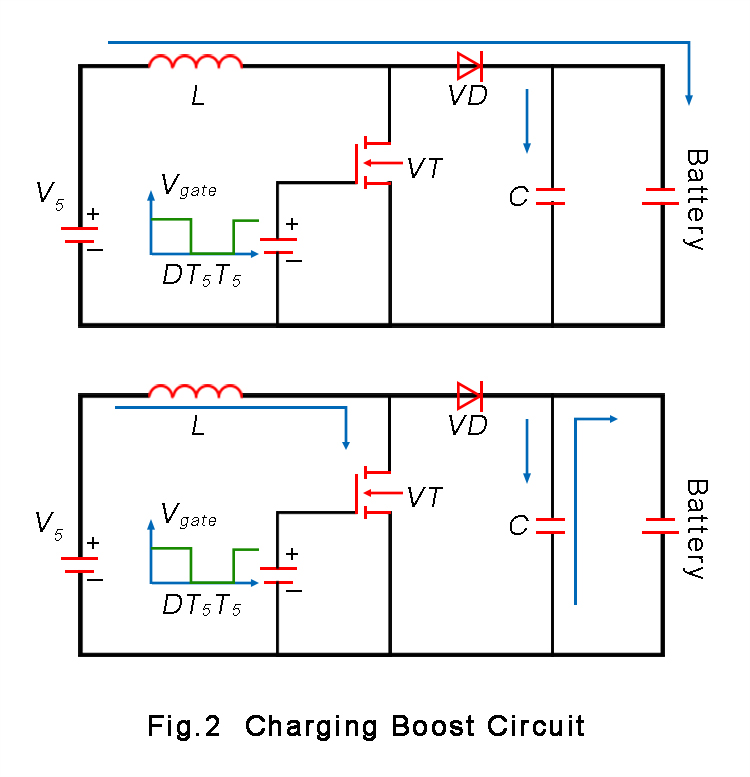 The control circuit of LED is relatively simple, which can be driven by DC, and its service life can reach 100,000h. However, the strength of driving current has a great impact on the life of LED. If the current is too big, it may cause serious LED light decay and reduce the life. Therefore, the drive circuit must be designed reasonably, as shown in Figure 3 is the LED constant current control circuit realized by the buck circuit. 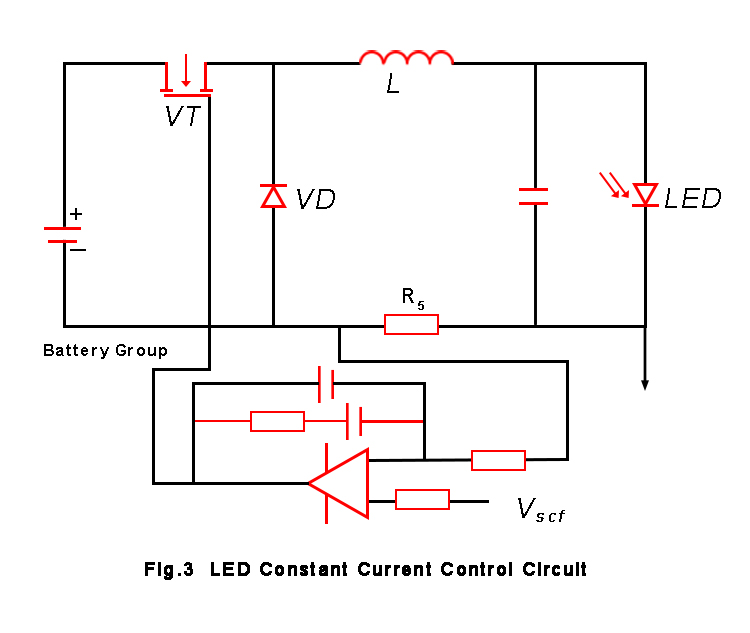 3. super capacitors
Super capacitor is a new energy storage component. It is based on the principle of double electric layer and uses porous carbon as electrode. It has big capacitance and it’s performance is between the traditional rechargeable battery and the ordinary capacitor. It can be fully charged in a very short time and store a lot of electric energy like other rechargeable batteries. When discharging, the current is released by the electrons between moving conductors (instead of relying on chemical reaction), so as to provide power for lamps. But at present, super capacitors are used for auxiliary batteries because of the high cost and large capacity power supply is not easy to achieve in short time.

The output power of solar cell changes with the change of weather. This unstable charging current affects the battery life, which will increase the system cost and cause more environmental pollution. So the system add super capacitors, which can charge and discharge quickly. Particularly when the sunlight is not strong, the control system stores the unstable electric energy output by the solar cell in the super capacitors, and then charges the battery with a constant current after it is fully charged, which can improve the life of the battery. What’s more, the energy storage of the super capacitor can also provide more energy for the street lamps in continuous rainy days and increase the lighting time.

It can be seen that the charging time is very short, which is convenient for quick charging of the system.

The discharge time of supercapacitor is determined by the formula：

It can be seen from formula (2) that the energy storage of super capacitor can discharge to the load for 1.6h, which prolongs the power supply time of the system.

Battery is the power memory of the solar street lamp, which supplies the collected power to the street lamp to lighting. Because the input energy of the solar photovoltaic power generation system is extremely unstable, it usually needs to be equipped with the battery system to work. There are usually lead-acid battery, Ni-Cd battery and Ni-H battery. The selection of battery capacity usually follows the following rules: first, on the premise of satisfying enough lighting at night, the energy of solar cell modules in the daytime should be stored as much as possible, and, the stored energy that can meet the lighting requirements in successive rainy days and nights.

6. current converter
The current is converted into linear DC voltage signal by impedance, which is used in LED load.

8. lamp pole and other accessories