On March 22, the National Development and Reform Commission and the National Energy Administration issued a circular on the 14th Five-Year Plan for a Modern Energy System (hereinafter referred to as the Plan). Looking ahead to 2035, decisive progress will be made in high-quality energy development, a modern energy system will be basically completed, and renewable energy will become the main power source. Photovoltaic according to the European Union (EPIA) predicts that by 2040, the proportion of renewable energy in energy structure will reach more than 50% of the total energy consumption, the proportion of photovoltaic power generation will be more than 20%; By the end of the 21st century, renewable energy will account for more than 80 percent of the total energy supply, and photovoltaic power will account for more than 60 percent. Energy networks are also changing to accommodate the increasing energy demand, while also supporting the penetration of renewable energy, and the process of changing energy networks is bound to add a large number of energy storage systems. To a great extent, the energy storage system solves the problem of randomness and volatility of new energy power generation, which can realize the smooth output of new energy power generation, effectively regulate the changes of grid voltage, frequency and phase caused by new energy power generation, so that large-scale wind power and photovoltaic power generation can be easily and reliably incorporated into the conventional power grid, and improve the overall utilization rate of green energy. Energy storage is the key element for the successful realization of the Plan.

New energy storage technology, lithium ion battery is preferred,like green tech capwall storage battery. Lithium-ion battery has good energy storage performance, long service life and high cycle times. Under normal circumstances, lithium-ion batteries can be around 3,000 cycles, lithium titanate batteries up to 25,000 cycles. The newly installed capacity of lithium-ion battery ranks the first in both the world and China, and many domestic enterprises are deploying lithium-ion battery energy storage technology. The use of battery echelons extends the service life of lithium-ion batteries and further reduces the cost. Lead battery technology is mature, the battery material source is wide, the cost is low, lead carbon battery can be filled in 90 minutes, reduce the negative sulphate phenomenon, prolong the battery life, and power density is also improved, is the main trend of lead battery technology development. The energy density of sodium-sulfur battery is as high as 760Wh/kg, the conversion efficiency is close to 100%, and the number of battery cycles is as high as 2500. However, the cost is high and the working environment is very demanding. Only 300℃ can be started. The sodium-sulfur energy storage battery is widely used in foreign countries, but has not been widely promoted in China. The flow battery adopts the special structure of the positive and negative electrolyte circulating separately, which improves the chemical reaction efficiency. The energy conversion efficiency can reach more than 96%, the energy density can reach 92Wh/kg, the number of cycles is about 13,000, and the service life is about 20 years. Due to the low maturity of the flow battery technology, large volume, price is not dominant, so it is not widely used in China. Currently, in chemical storage, researchers are focusing on improving material properties and capabilities, including the optimization of electrodes, electrolytes, new membranes and separators. The most promising technologies include Li-S, M-Air and solid-state batteries, as well as new flow cells and hybrid capacitors. 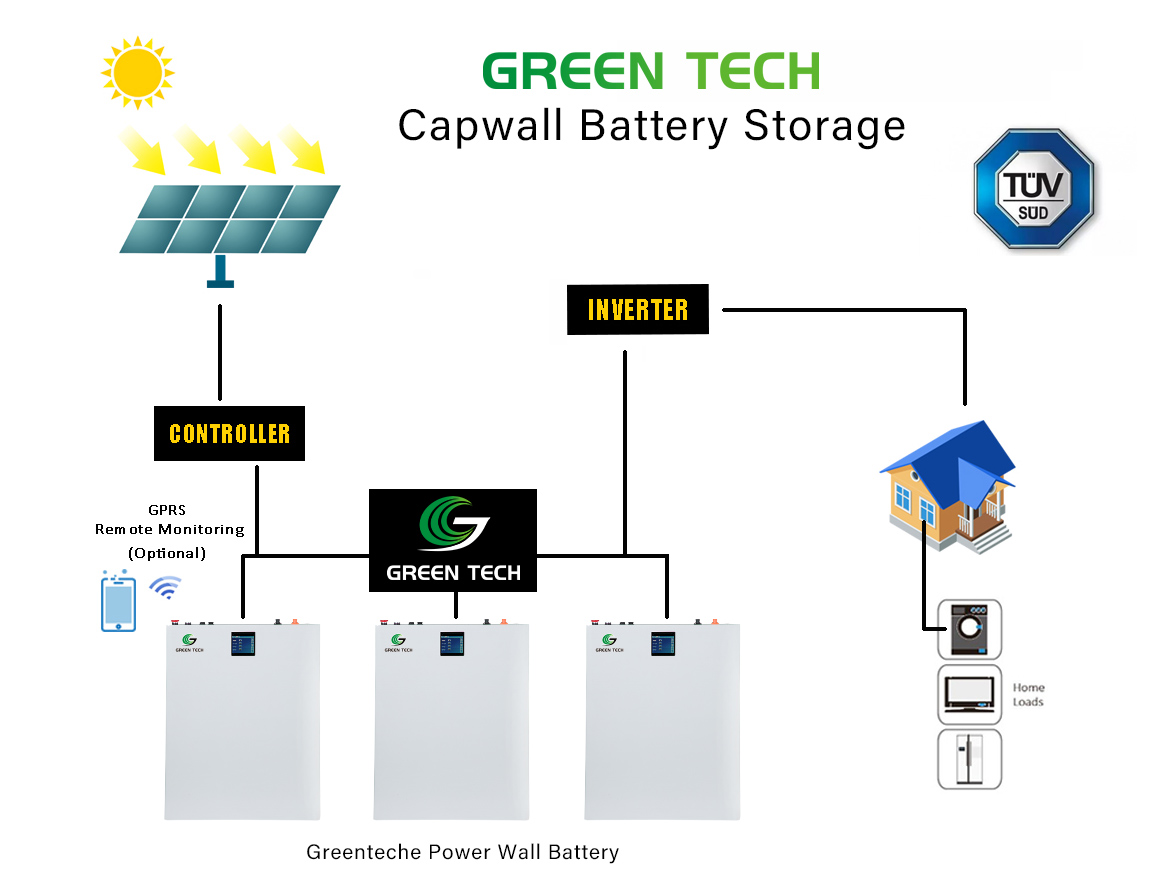 Future development directions for storage systems include increasing storage capacity, 48V 5.5/10kWh for house energy storage power capwall battery promoting integration with green energy, higher cycle life and efficiency, and higher discharge time capabilities, among which the most important is the design and development of hybrid solutions with high reliability. The United States and Japan regard energy storage as an independent industry and have introduced special supporting policies. China should also pay attention to the development of energy storage, encourage the research and development of related technologies, and introduce relevant policies, so as to smoothly realize the goal of renewable energy power generation becoming the main power source and achieving substantial results in the construction of new power system.