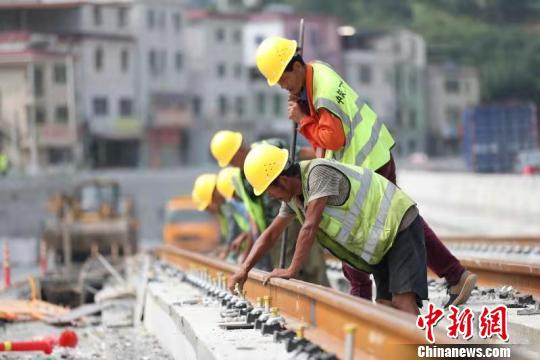 On October 14, workers of China Rail Way 22th Bureau Group were fastening the rails of tram line 1 in Huangpu District, Guangzhou. On the same day,  the no-load trail

run of the test section of the line has been successfully done half a month.

As of the 14th, it has been half a month since the no-load trail driving in Yongshun Avenue test section of tram line 1 in Huangpu District, Guangzhou. The wheel rail system, pantograph catenary system, level crossing and have been further verified and optimized. Especially the super capacitor with single capacity of 9500F only takes 30 seconds for charging once , which marks the no-load test running of the super capacitor tram line with the largest single capacity in China was succeed.

Hu Wentao, Director of Huangpu Guanghzou tram project department of China Rail Way 22th Bureau Group introduced about the project.  The tram line 1 in Huangpu District, Guangzhou, with a length of about 14.3km, is a key project in Guangdong Province. In this line, there are 20 stations, 19 stations to be built in the near future and 1 ground station reserved in the future. The average station spacing is about 0.75km, the maximum station spacing is about 1.3km, and the minimum station spacing is 0.37km. The whole track bed will be used for all lines except the entrance and exit lines. In addition, the whole line is provided with one parking depot and one parking lot, the parking depot covers an area of 6.58 hectares, and the parking lot covers 3.25 hectares. 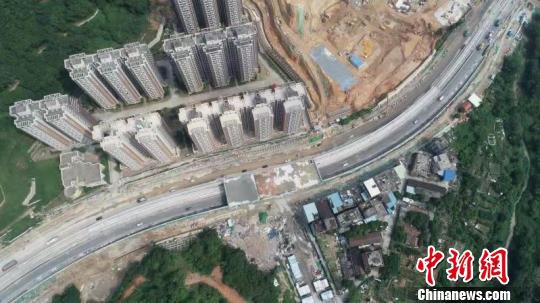 photographed by UAV on October 14.

Hu Wentao said the project uses super capacitor for charging and the tram adopted energy storage device for interval operation. The capacity of the single super capacitor of the line system is 9500F, which is the longest line and the largest capacity of the tram project in Guangdong Province. When the tram enters the station, it does not need the driver's operation, and the charging is completed automatically with 30 seconds, with a running distance of at least 2km. Because the super capacitor is used as the traction power supply of the energy storage device, there is no contact net in the area, which greatly reduces the “spider web” in the air of the city. In addition, more than 80% of braking energy is recovered to super capacitor and stored as electric energy, so the energy can be recycling. It is high efficiency, energy saving and environmental friendly.

The tram used in the project is 37m long, 2.65m wide and 3.68m high. It is a 100% low floor tram line, which greatly facilitates passengers to get on and off the train. The rated passenger of the whole train is not less than 280,  the maximum passenger is 360, and the number of seats is not less than 50. The maximum running speed of the vehicle is 70 km/h.